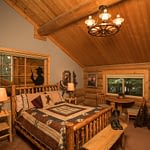 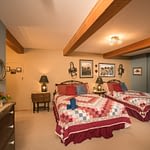 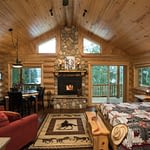 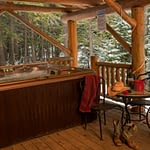 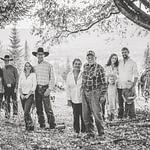 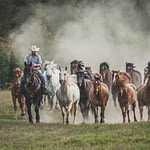 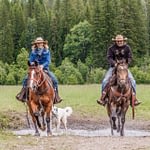 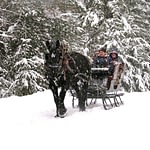 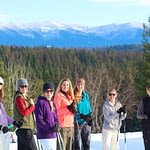 Danielle: (00:01)
We are back again with my grandma, Virginia Wood, and we're going to talk a little bit more with her about her childhood growing up, up on Gold Creek. So Grandma, as you were growing up, what were some of your daily chores?

Grandma: (00:15)
Well, when I was going to school, as I remember, I didn't have a whole lot of chores. Well, I always helped with the dishes in the evening, but as far as going outside and doing chores, I really didn't have any that I can remember.

Danielle: (00:37)
You mentioned in the last episode that your mom passed away when you were 10 months old. With your dad working, you were then raised by your grandparents. Can you tell me a little bit about your Hoffine grandparents?

Grandma: (00:52)
Well, they were just like a mom and dad to me, but of course, I always had my dad in my family as my dad. But anyhow, they treated me really well and when my mother, well, when I was old enough, my grandma explained to me about God and where my mother was or would be. And we always, every year, I don't think we missed a single year of going to the cemetery, at the Pack River Cemetery, putting out flowers. So, and my Grandma also explained to me that that bad language was not for girls. [Laughing…]

Danielle: (01:48)
Which, her conversation clearly worked because I don't think I've ever heard you swear except for in telling the haystack story.

Grandma: (01:54)
Okay. My grandmother, well, and my grandpa too, but I didn't hear it as much from him as I did from my grandmother, was quite superstitious.

Grandma: (02:12)
And I remember very distinctly one day in the summertime, we were getting ready to go work in the garden. So I went out and got the hoe and brought it in the house and my grandma about had a conniption fit. Get out of there, back out of the house. That's bad luck to bring a hoe in the house. Isn't that crazy?

Grandma: (02:40)
And then another one, and it still haunts me to this day. If you start something on Friday, you'll never finish it.

Grandma: (02:53)
I have. I'm sure, but I think about that and, well people still do this, but my grandfather especially always, when he planted the garden, he had the check to see that the moon was right.

Grandma: (03:15)
And there was other things connected with the moon that you should or shouldn't do such and such at times. So anyhow, but, and people still do that today.

Grandma: (03:32)
Well, my grandfather and my Uncle Andrew, milked cows. And it was always interesting to me to go out to the barn and try to milk cows. And we had one old cow that was real tame. So my granddad would let me milk her some, and then you had to bring the milk to the house. And we had a building specially for that We would separate the milk, the cream from the milk, and the cream is what was sold. And probably there isn't very many people are familiar with a cream separator. But that looked like that was fun. And I tried to get my grandpa to let me do it. “No, no, it's got to be done just so.” So anyhow…

Danielle: (04:29)
Don't we have a cream separator down there in the, we've got one down in the lodge at the kind of the entrance to Grandma's and Grandpa's rooms.

Danielle: (04:38)
Was that his cream separator or is that just one we found?

Grandma: (04:41)
No, that was later, quite a lot later edition. But that's basically how it was built. And the thing about that separator, part of it has a bunch of disks in it, like 25 or 30, that you had to wash every day. Anybody that knows anything about a separator will know what that means.

Danielle: (05:06)
A lot of work it sounds like. Your dad and your grandpa worked, they did a lot of logging. I heard you say that when they would come back from a logging camp, your grandma was really concerned about bed bugs. So why was that? And was that a legitimate fear or just her fear?

Grandma: (05:27)
No, that was legitimate. I can remember, she would mix up some kind of a concoction and with a sponge or something, she'd go around all the beds, mattresses and treat them. Now backing up, my grandfather really never worked in the woods. He, like I said, he had milk cows. It was my dad and his brothers that went out and worked in it.

Danielle: (05:57)
So it was more their sons that went to these logging camps?

Danielle: (06:03)
You mentioned that they sold cream from their milk cows to make some grocery money. What were other things that they did as a source of income?

Grandma: (06:15)
Well, of course the cows had calves, which they would sell part of them and that was quite a little bit of an income, but other than that, that was about it.

Grandma: (06:54)
Well, like I said, once a week, normally everybody took their cream to town.

Grandma: (07:05)
Yeah. However, we had a big snowstorm and the individual farmers were not able to get out on their own, so they decided to get together one week and with a sleigh and two teams of horses they headed to town with everybody's cream. They got to the Pack River Bridge, which is just North of North Side School, and that bridge was up the Creek a ways from Pack River, a little ways from where the bridge is today. So anyhow, they started across this bridge and with the heavyweight it fell in and my grandparents' team was hooked to the sleigh and the other team in front came back over the top of that team and our team was killed. Nobody was hurt, but it was a pretty serious event.

Danielle: (08:13)
Yeah, that sounds like a pretty dramatic event. So with your grandparents losing a team of horses, that was probably pretty-

Grandma: (08:23)
It was, yes. My grandfather was really, really sad about it. Back then, there was a telephone line that went from Sandpoint up to the Lightning Creek lookout. And so we had a telephone at the school and I remember the call coming in and I had to deliver that back at home that night. And that was a sad day. However, my grandfather still had a Colt, I believe from the mare that was on that team. And the County did give them a new team, but they weren't well broke and we never really got any use out of them. And my grandfather ended up buying another horse to go with the one that he already had.

Danielle: (09:25)
You had a couple musicians in your family. Who were the musicians and what did they play?

Grandma: (09:35)
Well, my dad's family, all of them were musical and I can't say that I inherited any of it, but my dad played violin, my grandfather played violin, my Uncle Andy played a banjo. Then there was [inaudible 00:09:55] guitar and my youngest uncle, Leon played…

Grandma: (10:16)
Well, they played quite a bit at home, just for fun and then they played at dances.

Danielle: (10:25)
So that kind of leads me into my next question. Did the neighbors on Gold Creek get together for social events?

Grandma: (10:31)
Yes. At the school, it seemed like there was a dance quite often. And of course at Christmas and spring, last day of school, they always had a big…

Danielle: (10:49)
And those get togethers, did they pretty much always involve music to some extent?

Grandma: (10:54)
Well, yeah, to some extent. I remember one winter, I don't remember exactly when it was, I was getting a little older, we were at the school, we drove to the school and of course back then four wheel drive wasn't invented. So anyhow, we danced and danced and danced. And usually it was about two o'clock before everybody started to go home.

Grandma: (11:27)
No. Yeah, two o'clock in the morning. And so we went out and here it had snowed and snowed and the cars couldn't make it out. So we walked home. Some of the guys broke the trail and the rest of us all walked.

Danielle: (11:49)
That'd be an interesting middle of the night tromp through the trees.

Danielle: (11:57)
So we kind of mentioned it earlier, but how did you and grandpa meet?

Danielle: (12:27)
Okay. Well I think, we'll wrap up there for now. And the next time that we talk, we're going to talk more about kind of your high school years and after you're married kind of timeframe.

I am excited, this episode, to dive into my Grandma's story. Her mother's family arrived on Gold Creek in 1918; over 100 years ago.!

What is an adventure vacation?

An adventure vacation is travel involving exploration, a cultural exchange, risk, a connection with nature and requiring a special skill or physical exersion.